DOUALA, Cameroon — In Cameroon, where English-speaking separatists are fighting the largely French-speaking government to establish a new nation, journalists covering the violence are increasingly finding themselves behind bars on a surprising charge: fake news.

The latest case centers on the killing of an American missionary from Indiana, who was shot dead 12 days after his family moved to this central African country in October. In the immediate aftermath of his death, in one of the country’s unstable regions, Cameroonian journalist Mimi Mefo Takambou sought to find out who killed him.

But after she cited social media reports that claimed the Cameroonian military had shot Charles Wesco, she was accused of publishing fake news online and later arrested.

Mefo, who works for Equinoxe TV, is one of more than a dozen journalists who have been jailed or questioned this year in Cameroon, a once-peaceful country that is spiraling into civil war in its English-speaking regions.

As of early December, seven journalists were in custody — four on charges of reporting false news, the others on a variety of charges, including embezzlement and defamation, according to the Committee to Protect Journalists. Two of the journalists were later released, but Cameroon remains the second-leading jailer of journalists in sub-Saharan Africa after Eritrea, CPJ said.

Cameroon’s law prohibits anyone from publishing “any news without being able to prove either its truth or that he had good reason to believe it to be true.”

Press advocates see a recent uptick in accusations of fake news as the government’s attempt to stifle journalists reporting on the growing internal crisis.

However, the government claims the spread of deliberately inaccurate information has distorted and inflamed the conflict.

“It’s a terrible problem for us — fake news, disinformation, poisoning,” Issa Tchiroma Bakary, Cameroon’s minister of communications, said in his office in the capital, Yaounde. “We are confronted by this problem, which, unfortunately, we don’t have a solution to. . . . Journalists need to first verify the authenticity of information before publishing it.”

Mefo’s case is particularly sensitive because Cameroonian authorities feared the killing of an American could disrupt ties with Washington, a key security partner. Around 300 U.S. troops are stationed in the country’s far northern region, where they train and assist Cameroonian troops fighting Boko Haram militants.

The conflict in Anglophone regions, far from where those troops are based, has displaced hundreds of thousands of people, according to United Nations estimates. Amnesty International reported in September that at least 400 civilians had been killed in the past year — a number the government disputes.

Human rights groups have accused both sides of violence, blaming separatists for attacking state security forces, schools and other targets, and accusing the military of abuses including burning villages and killing civilians.

The mounting accusations against Cameroonian forces have led some U.S. senators to call for a reevaluation of U.S. security assistance to Cameroon.

The Cameroonian government has denied allegations of widespread human rights abuses in the Anglophone regions. Col. Didier Badjeck, spokesman for the Ministry of Defense, said the “Cameroonian army is doing a job that is a just job, according to the rules, and respecting human rights.”

Journalists reporting on the conflict often find themselves caught in the middle.

“We have the impression that if you’re not singing the praises of a particular individual, either the government or the pro-independence fighters, or even the [political] opposition, you are considered as an enemy,” Mefo said at her home in Douala. She was released in November after three nights in jail.

Angela Quintal, the Africa program coordinator at CPJ, said that in Cameroon and elsewhere, the term “fake news” is being used “to try to demonize journalists.” Worldwide, the advocacy organization has noted an increase in government allegations of fake news — a favorite phrase of President Trump’s — and a spike in arrests.

“Trump’s language is the sort of language that is being echoed everywhere,” she said. “Not only are they echoing it, but journalists are being arrested.”

French and English are Cameroon’s national languages, a byproduct of the European colonial legacy that shaped the country’s modern-day bilingual identity. But English speakers make up only 20 percent of the population, and French speakers largely control the government. Anglophones say that they have been forcibly assimilated into the Francophone legal and educational systems and that their grievances have not been adequately addressed by the central government in Yaounde.

Two years ago, frustrations boiled over into a protest movement. A number of moderate Anglophone leaders were jailed, and more-extreme voices took over. Soon an armed separatist movement was fighting to break away from Cameroon and create a new state called Ambazonia.

On Nov. 7, Mefo was refused bail, handcuffed and taken to New Bell prison in Douala, a major port city.

“As a lawyer, when such things happen, you feel terrified,” Richard Tamfu, the lead lawyer on Mefo’s case, said.

Cameroonian President Paul Biya intervened and ordered the charges dropped. An 85-year-old Francophone in power since 1982, Biya recently won reelection in a contest the opposition claimed was rigged from the start. He was sworn in for another term the day before Mefo was jailed.

Although her detention was short, the damage was done, Tamfu said. “It’s a really scary situation because most journalists will not want to speak out now. They will not want to go out to those areas to report now,” he said.

Tchiroma, the minister of communications, insists the government does not see journalists as the enemy. “But this lady, she made a mistake,” he said of Mefo’s reporting on Wesco’s death. Biya gave her “another chance to take back up her job and to do it this time with a lot more attention.”

Yet, even Wesco’s family lacks clarity about what happened the day he was killed.

Charles and his wife Stephanie, both from Indiana, met when Charles, a piano tuner, stopped by her family’s home to look at her father’s piano. They had been married for nearly 14 years when they moved their family to Cameroon to pursue a calling for missionary work. Charles “had no intention of getting involved” in the conflict, Stephanie said in a phone call from Indiana, where the Wesco family has since returned.

When the couple and their eight children moved to Cameroon on Oct. 18, “it was literally like he was living out the greatest dream of his life,” Stephanie said.

Then, on Oct. 30, the couple, their 11-year-old son and another American missionary piled into a vehicle to visit a market close to their house. They mapped out the route to try to avoid danger and prayed for God’s protection before leaving, she said.

From the moment an unknown gunman opened fire, the rest is a “blur,” she said.

She witnessed her husband’s killing but still can’t say who pulled the trigger.

The U.S. State Department has not identified a suspect, saying in a public statement that Charles was “caught in crossfire.” Cameroonian officials say the autopsy determined he was shot by ammunition commonly used by the separatists. They insist all evidence points to the pro-independence fighters.

But for Mefo, who has reported extensively on the crisis in the Anglophone regions, Wesco’s killing is just one in a series of opaque incidents in which it is difficult for anyone, even journalists, to discern who was responsible. That doesn’t mean they should stop reporting, she said.

“The place of the journalist is not behind bars,” she said. “We are the watchdog of society.” 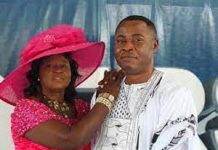 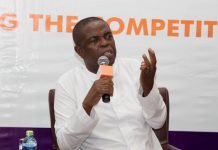