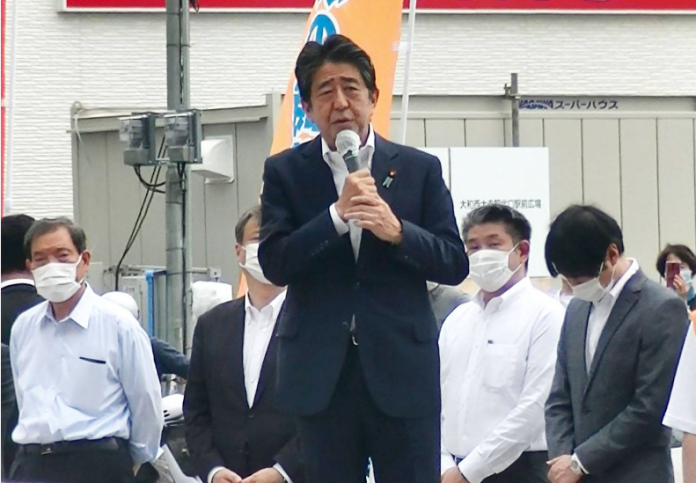 Former Prime Minister Shinzo Abe — one of the most consequential leaders in Japan’s postwar history — died Friday after being shot while he was giving a stump speech in the city of Nara. He was 67 years old.

As Japan’s longest-serving prime minister, the assassination of Abe just two days before the Upper House election has shaken the nation, with politicians of all stripes condemning the attack as an affront to democracy.

“I’m deeply saddened and lost for words,” Prime Minister Fumio Kishida said with red, swollen eyes following the news of Abe’s death. “We lost a great leader who loved the nation, looked to the future and made great achievements in various fields for the future of this country.”

“We must defend free and just elections, which are at the root of democracy. I will say this to the people until the very last moment of the campaign,” he said.

The police arrested the man suspected of killing Abe, who was giving a campaign speech in front of Yamato Saidaiji Station when the attack took place at around 11:30 a.m.

Videos of the incident showed two shots being fired. Japan is known for having one of the strictest gun control laws in the world. 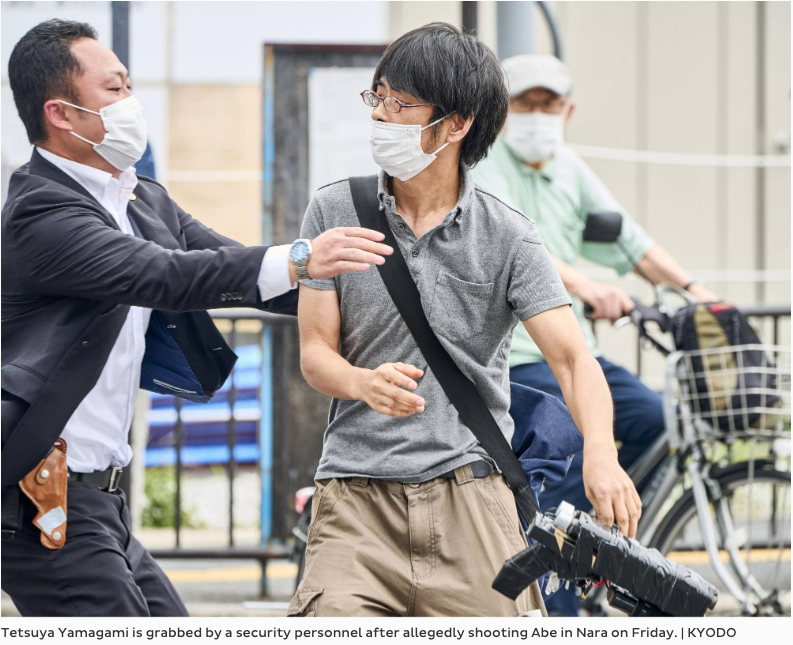 The former prime minister was unconscious when he was transported via a medical helicopter to Nara Medical University Hospital in the city of Kashihara, south of central Nara, where he was pronounced dead on Friday afternoon in spite of hours of effort to save him.

After Abe’s death, doctors at Nara Medical University Hospital told reporters that he was already in a state of cardiopulmonary arrest when admitted to the hospital at 12:20 p.m., having sustained two gunshot wounds to the front of his neck. His heart was damaged by the gunshots, they said.

He died at 5:03 p.m. from loss of blood, hospital surgeon Hidetada Fukushima said, adding that doctors tried to resuscitate him and gave him massive blood transfusions.

Prior to Abe’s death, Kishida ordered ministers campaigning outside of Tokyo to return to the capital immediately, and convened a Cabinet meeting.

Police arrested the suspect, Tetsuya Yamagami, a 41-year-old resident of the city of Nara, on suspicion of murder and confiscated the gun.

Government officials said Yamagami had been a Maritime Self-Defense Force officer for three years until around 2005.

Yamagami told investigators he “had grievances” with the former prime minister and had intended to kill him. He also said, however, that he “did not resent Abe’s political beliefs.” The police found explosives in Yamagami’s home, NHK reported.

The gun used in the attack appeared to be hand-made, with media footage showing what looked like two barrels wrapped in black tape lying on the ground after the attack. 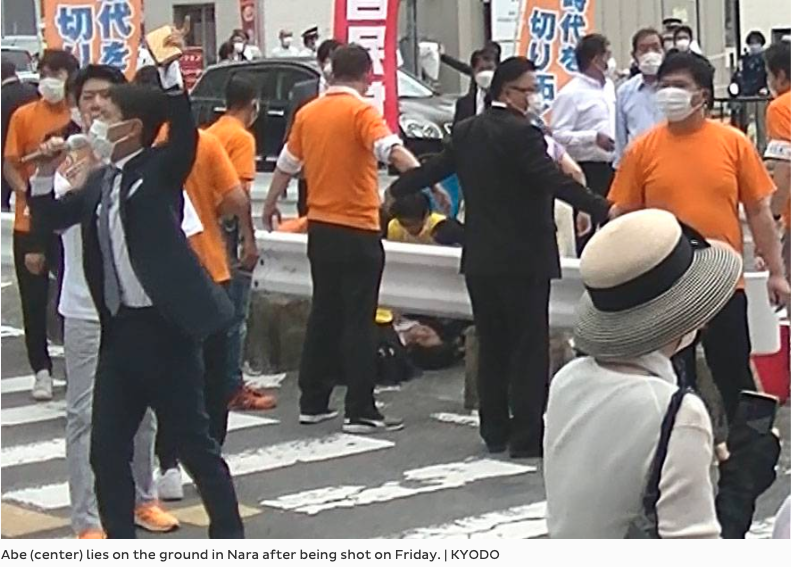 High school students who witnessed the shooting told NHK that a man came up from behind and fired two shots.

“The first shot sounded like a toy bazooka, and the man then stepped back after the first one,” a student said. After the attacker fired the second shot, a large amount of white smoke appeared, she added.

People in Japan were stunned at the use of a gun in the attack, a rare occurrence in the country.

Kensaku Kimura, a Tokyo office worker in his 40s, said that, even with the recent spate of mass shootings in the U.S., “it’s crazy that Japan is being affected in this way, especially in relation to one of the most influential people in the nation.”

Takeru Minakuchi, an office worker in Tokyo who has lived in the U.S., was almost in disbelief.

“Having lived in the U.S. for two decades, it is surreal to watch an assassination attempt unroll on Japanese daytime TV,” he said. “I am nervous about the ramifications of this incident for the politics of the (Asia-Pacific) region (and beyond), but more so about further infringements of our personal freedoms in the name of public safety.”

Abe was a polarizing force. While he faced both praise and criticism domestically for his conservative views and way of governance, Abe has also been regarded as raising Japan’s stature on the world stage.

In an era of increased Chinese military and economic assertiveness, Abe is widely credited as the key architect of “the Quad” framework — a security grouping of Japan, the U.S., Australia and India — and with advancing values-based diplomacy promoting democracy, human rights and the rule of law.

During Abe’s second time as prime minister, which ran from December 2012 to September 2020, he restored stability to Japanese politics following a period when the country was criticized for its “revolving door” prime ministers, in which the nation’s leader changed every year.

He previously became prime minister in 2005, only to step down a year later due to health reasons.

On the foreign policy front, Abe, unlike most other world leaders, also forged a close personal relationship with former U.S. President Donald Trump, and helped stabilize Japan’s ties with its main ally during a time marked by diplomatic tensions between the U.S. and other countries.

Abe was known for his hawkish policies, including his push to revise the pacifist Constitution to clarify the legal status of the Self-Defense Forces. Even after stepping down, Abe had been vocal about expanding the nation’s defense, urging the government to increase the related budget to 2% of gross domestic product. 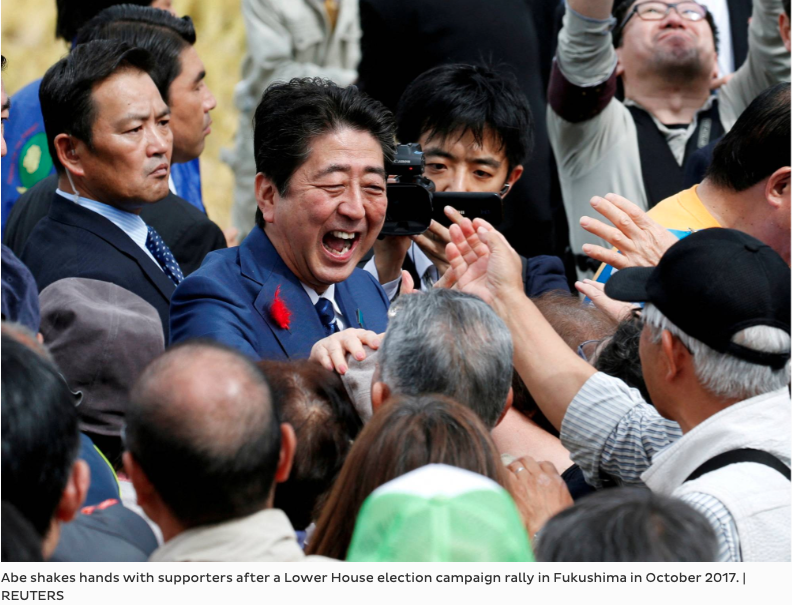 In August 2020, he abruptly announced his intention to step down due to deteriorating health and was replaced by Yoshihide Suga, his right-hand man and the chief Cabinet secretary during Abe’s second administration.

After Abe stepped down, he soon became leader of the Liberal Democratic Party’s largest faction, wielding significant influence within the party.

He had long been seen as a prospective candidate for prime minister, serving as deputy chief Cabinet secretary under Prime Minister Junichiro Koizumi and accompanying Koizumi to North Korea in 2002 for the return of five Japanese nationals abducted by the reclusive state in the 1970s and 1980s.

During the Upper House election campaign, Abe had been canvassing nationwide, attracting many people with his speeches about the need for constitutional revision and an increased defense budget. 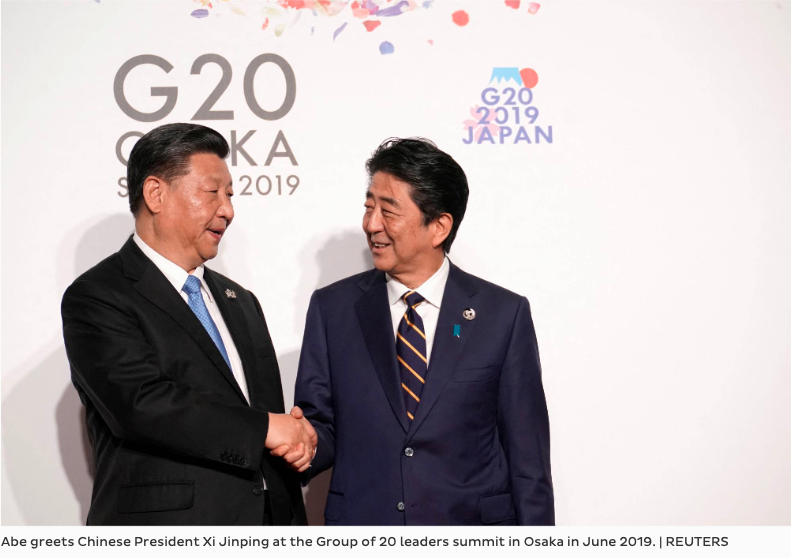 He started campaigning on June 22 in Tokyo’s Yurakucho district, before moving on to Hokkaido and the Kyushu region to campaign for LDP candidates.

He was also active on social media, posting photos of his campaigning. At times, high school students asked to take selfies with him, or passersby asked for a high-five.

“I, along with all Americans, am deeply saddened by the news that former Prime Minister Abe Shinzo has passed away,” U.S. Ambassador to Japan Rahm Emanuel said in a statement. “A Japanese statesman. A world leader. A friend of America. The clarity of his voice will be truly missed.

“The United States has lost a trusted partner and an outspoken advocate for our shared ideals.”

Yamato Saidaiji Station is on the Kintetsu line, an artery connecting Japan’s ancient capital of Nara to Osaka and Kyoto.

Abe had traditionally received strong support in the area. One of his closest allies, LDP policy chief Sanae Takaichi, represents Nara Prefecture’s second district, which lies just to the south of the station.